Wikipedia describes balut as a fertilized bird egg (usually a duck) which is incubated for a period of 14 to 21 days depending on the local culture and then boiled or steamed. The contents are eaten directly from the shell.

Balut that is incubated for longer periods have a well-developed embryo and the features of the duckling are recognizable. The partially-developed embryo bones are soft enough to chew and swallow as a whole. The mallard duck also is known as the “Pateros duck”, is considered to be the most important breed for egg production to make balut

The origin of this dish is said to be from Chinese’s “Maidan” or feathered egg in English. The Indochinese and Thaïs also have something similar to Balut. Nevertheless, it is the Filipinos who have made this dish notoriously popular.

In a way, the Filipinos culture actually revolves around this dish. Only here in the Philippines can you get Adobong Balut, bottled Balut, pickled Balut, Balut omelet in addition to the traditional suck, peel and gobble variety.

Going to the process of how balut is made then cooked will probably make one of us puke- Filipino or not.

But there’s no denying from Balut lovers (like me) that it’s often a street food that completes the Filipino foodie experience! As balut becomes a featured Filipino cuisine (yes, calling it a cuisine) in worldwide magazines, Pinoys can definitely take pride that it got the spotlight it deserves. 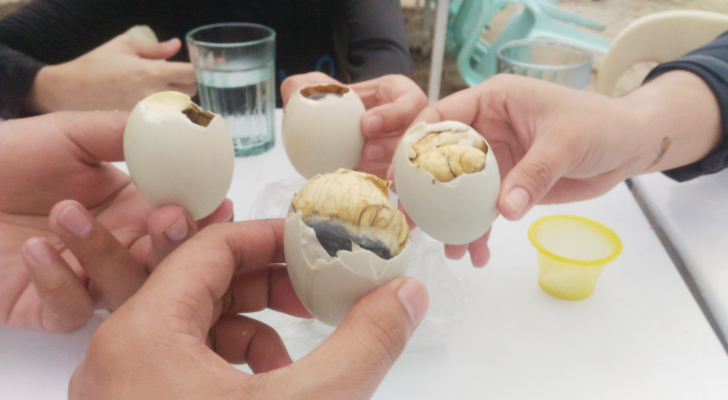 The Rise of Balut

Did you know that there was a petition started in New York’s Filipino restaurant ‘Maharlika’ to remove balut as an Asian delicacy?

Rappler reported, “The balut controversy appears to be a clash of cultures. While some people in western countries may find the food “inhumane” or even “disgusting,” balut is an important fabric in the cuisine of several Asian cultures. ”

The petition that has garnered nearly 5,000 signatures seeking to remove the Asian delicacy, balut from Maharlika did not pan out but my, the people are angry!

However, did you know that aside from being famous as an exotic Asian food in every “Try to Eat this Challenge,” it’s more than its scary look?

Yes, it also has some health benefits despite the reputation it gained. Taking from Philnews’ feature, here are the nutritional facts:

1. It contains 188 calories. Calories help to boost your energy. And this energy is consumed during the working of the bodies, to our cells to keep it alive and to the functioning of our internal organs.

2. It has proteins which are significant building blocks in repairing and building the tissues of our body and other parts of our body like the bones, muscles, skin, blood, and cartilages.

3. The balut has 2 milligrams of Iron. Iron helps the circulation of our blood.

4. It has 116 milligrams Calcium wherein the Calcium helps strengthen teeth and bones and serves as protection against osteoporosis and cancer.

As far as the method of eating a Balut is concerned, we can all agree or disagree how it should be eaten but I always prefer the cowboy style, being that Pinay who grew up eating it unexpectedly because you happened to see a balut vendor shouting from afar.

Yes, to those who can relate. It’s peeling the tip portion to allow the broth that surrounds the boiled embryo to escape. Then, we welcome the broth by sipping it out of the shell first.

After that, the way to eat the Philippines Balut is to sprinkle some salt or vinegar on it and then just bite down, chew and swallow. To tell you the truth, this is the part I dislike because it involves a lot of sprinkling for me.

If I can only have all the broth, please!

So my questions are: Have you tried Balut? Did you Enjoy it?

Where and how did you eat Balut? Do you have a great story about this? Share it!